If you go HERE or look on the bottom of this page (or any post page) you’ll see a media player with a playlist that has nearly all the drone style ambient songs. In celebration of this past decade of dreams and to actively usè this site more there may be a new playlist highlighting other songs with a new mix every month including relics, unreleased, in progress and demos.

The playlist now consists only of tracks from I Am My Own Mushroom and The Caduceus Saga. They were made in very similar styles with a nearly identical rig setup which relied heavily on Behringer’s V-amp 2 because the delay setting was such that I could tap tempo about two and a half seconds of loop time then strum a chord on the guitar volume turned to 0, then roll it up and down at various rhythms creating that swelling effect. Much improvisation made those pulsing, warm atmospheres that is the majority of IAMOM. Much of everything else was recorded while improvised with minor editing. Layering each run through and adjusting pan and volume levels made sculpting those sonic scapes possible. The availability of free software such as Goldwave and Audacity also made the mere idea of creating truly independent music a reality.

IAMOM was born from a dream and was shaped by haphazard trial and error in a very playful and experimental “I-don’t-have-a-clue-what-I’m-doing” kind of way. The Caduceus Saga on the other hand was more planned out and built upon things learned from the albums before it. Many of it’s ambient songs had the same setup but the execution was far better and audibly clearer. As experience lengthened, knowledge grew, and the style solidified, of course.

This about concludes the serotinal update. Stay tuned for the next post come autumn as it will probably be info about the crowdfunding plans and ideas for the upcoming release. 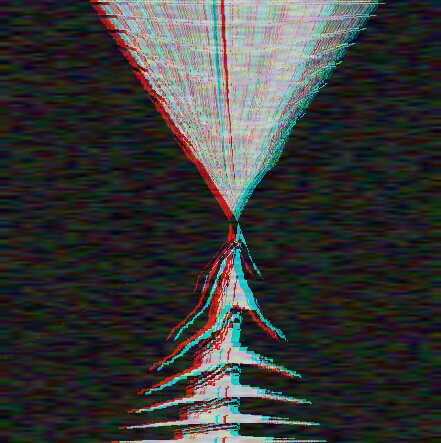 Like dots on a CRT so are the dreams of of our lives.